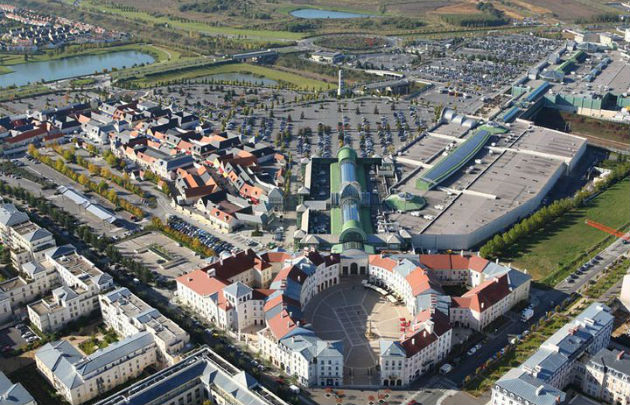 Val d’Europe shopping center comprises over 150 shops based on fashion, new technology, mobile phones, sports, design, fine foods, French wines, toys, and many more categories. It is a giant place to update your life and style with the world’s best and popular brands and other products. This is the most recommended place to shopping in Paris city as, either Disneyland Paris visitor or Paris visitor. Distance from Disneyland Paris to Val d’Europe is only 4.5 km. It spends only 5 minutes to 10 minutes to reach. Val d’Europe shopping center opens, Monday to Saturday from 10 am to 9 pm. By the way, Val d’Europe all restaurants open for customers in every day till midnight.

The total distance from the Charles de Gaulle airport to Val d’Europe is 47 km. You have a few ways such as public train, shuttle bus, and taxi services to pass that 47 km. let’s fond out the most comfortable way.

You have 2 methods to get from the airport to Val d’Europe shopping center. The first method is catching an RER B train from the terminal 2 of Charles de Gaulle airport which travels to Chatelet Les Halles. Then you have to get from Chatelet Les Halles to Marne-la-Valle by RER A train. It will not an easy journey with children or lots of luggage. This total journey mat takes up to 1 hour to reach Val d’Europe. RER trains available at the Charles de Gaulle station from 5 am to midnight. And RER trains run every 15-20 minutes during that time.

The second and bit easier method than get with RER trains is, catch SNCF trains. It is a direct journey from Charles de Gaulle to Marne-la-Vallee. SNCF trains also available from 5 am to midnight only. And total time spends to get from the airport to Marne-la-Vallee is varies from 10 minutes to 50 minutes. However, it is faster than get with RER trains.

There are many bus services operate service from Charles de Gaulle to Val d’Europe. But the Magical Shuttle bus service only operates a direct service from the airport to Val d’Europe. You can catch a Magical shuttle bus from Charles de Gaulle terminal 2F between 9 am to 8 pm. The total journey by bus also may take up to 1 hour to complete the journey.

Both of the above options are cheap options. But it has many issues on availability, comfortability, and duration. However, get from Charles de Gaulle by taxi is not a cheap option. But it turns off all issues come with above train and bus services. There are many private taxi services operate their services in Paris. And you can see many taxies owned by many taxi services, in the Charles de Gaulle airport as well. And It spends approximately 40 minutes to 50 minutes to get by taxi. So, it is faster than the train or bus.

However, you have to pick the best taxi from thousands of taxies. For that question, we are the answer. Our Paris privet Shuttle service provides the best service with the cheapest price by considering other services prices. We provide a comfortable service with any of your comfortable vehicle to feel like your vehicle. Taxi booking, cancelling, delayed arrival waiting and extra facilities such as baby seats are totally free and there are no hidden fees. So, stay with us for your journey will make the feeling like you are on your vehicle. Enjoy it.